How can we help you today?

Divers, Spear fishers, Kayakers and Surfers have long appreciated the protection Shark Shield affords them when engaging in their favorite pastimes. Sharks are opportunistic by nature and will naturally single out any food source that appears easy to exploit. Shark Shield allows these people to focus on their chosen reason for being on or in the water without feeling like they are part of the food chain.

No-where is a Shark’s opportunistic behavior more apparent than when fishing. It’s well known amongst both the commercial and recreational fishing communities that a struggling fish is irresistible to sharks. Many Anglers are also Divers and Surfers so it was inevitable that sooner or later someone would take their Shark Shield and see how it worked to deter Sharks from taking fish when fishing.

Although Shark Shield wasn’t developed as a tool for Anglers there have been some encouraging results for those prepared to adapt the technology in a novel and interesting way.

Fishing for Demersal Species from boats

Raising high quality Demersal Reef species from the depths can be a demoralizing experience if Shark’s are in attendance.  It’s not unusual for an otherwise productive location to be deemed “unfishable” when anglers lose fish after fish to Sharks. This becomes both frustrating and wasteful to a valuable resource. Shark Shield can be utilized in this situation to dramatically reduce collateral damage from Sharks.  Wouldn’t it be great to reduce the fish wastage caused by feeding Sharks and target your chosen quarry more effectively? Less time moving to different locations in an effort to avoid Sharks also results in less fuel burned and less wasted time. A win-win for both the angler and the environment.

In practice the deployment of a Shark Shield below a boat for fishing applications requires some guidelines. Most Anglers create a “drop line” and attach the Shark Shield direct to the bottom of the line. Attaching an effective weight on the end of the line below the Shark Shield serves to get the outfit down to the chosen depth.  The amount of weight required is dependent on current and drift forces but expect at least 1kg to be required. Using a fish release weight is one possibility. Diving belt weights are also worth considering. Essentially any weighty, compact object should get the job done. Be prepared to experiment with the amount of weight and have a system where weight can be added or subtracted depending on the conditions on the day. Aim to have the drop line hanging below the boat as vertically as possible. This helps anglers keep track of where the Shark Shield will be located in relation to their own lines thus helping to avoid tangles with the drop line.

Anglers experimenting with Shark Shield have observed an effective sphere of influence of approximately 10 meters. With this in mind it becomes possible to position the Shark Shield in the most effective position to deter Sharks from taking hooked fish.

In depths of 20 meters or less the Shark Shield is often positioned half way between the surface and the bottom thereby creating a broad zone from the surface to the bottom. In waters greater than 20 meters deep be prepared to experiment in terms of the depth of deployment. It can be impossible to predict where in the water column Sharks are likely to strike your fish. Anglers experimenting with Shark Shield generally try to position the Shark Shield as close to the Sharks as possible. This could be right down near the bottom or right by the boat depending on the day.

There are two options with what to do with the tail of the Shark Shield. It can be left to freely drift around in the current or it can be attached to the drop line so it is positioned vertically in the water. Which option you choose might depend on such variables as current speed, drift speed and how many anglers are on board. If opting to attach the tail to the drop line, cable ties would probably be the best option. Simply snip them off when packing the gear away.

There are some instances where it might be possible to attach a Shark Shield direct to the main fishing line. During some initial trials with professional Snapper fishermen operating out of Carnarvon it proofed a successful strategy to attach Shark Shield directly above the top hook of the gear using a Shark clip and tethering the tail vertically up the main line. This approach was possible due to the extremely heavy duty nature of the gear used and the electric reels used for retrieval. Although recreational anglers would probably find this approach difficult to impossible, it might be a viable approach when fishing very deep water with electric reels. As this form of angling is increasing in popularity it is probably only a matter of time before someone gives it a try.

Naturally there is some risk of angler’s lines becoming tangled with the Shark Shield or the drop line. The best strategy is to ensure adequate weight is used to create a vertical drop, and to position anglers a reasonable distance from where the Shark Shield is deployed.

There are no hard or fast rules for how and where to deploy the Shark Shield in order to deter Sharks from taking your fish. Variations in sea conditions as well as the unpredictable nature of the Sharks themselves make it impossible to give a fixed set of instructions. However the above guidelines have been established as a starting point and Anglers are encouraged to experiment to determine the best solution on the day.

Will Shark Shield scare away the fish I’m trying to catch?

Which Shark Shield should I use for Fishing?

Most Anglers experimenting with Shark Shield have been using the Freedom7 model. This isn’t surprising given this unit’s popularity with Divers. In terms of suitability for Angling the Freedom7 can operate in depths of up the 50 meters and the 7 hour battery life should cover most fishing sessions.

Shark Shield is interested in your experiences using the product for fishing applications. Feel free to tell us about your successes or failures so we can continue to develop the product and bring you the best in Shark deterrent technology. 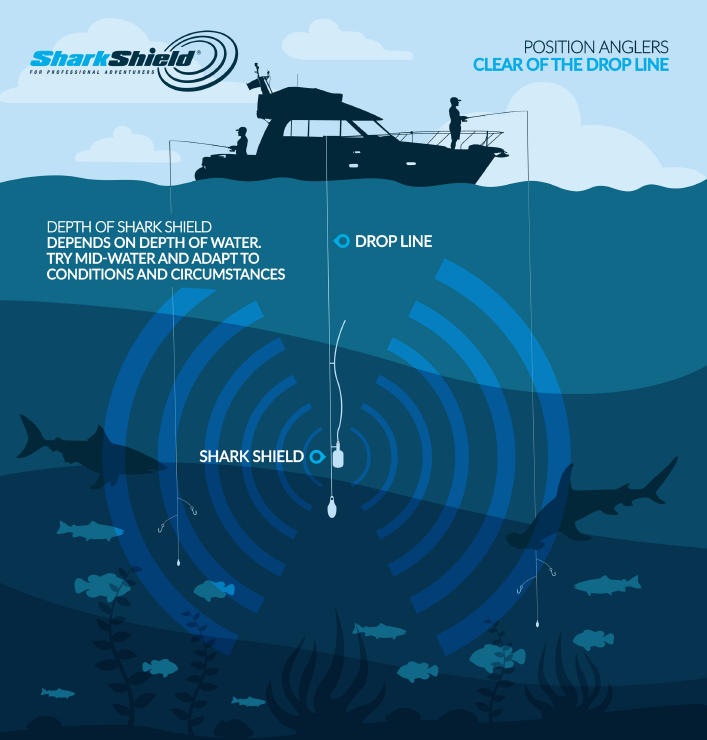 Topics in this forum

Didn't find what you were looking for?